Amdane Sanda is a junior at Charlottesville High School and in his second year of the STRIVE mentoring program. A native of Togo, West Africa, he started with Abundant Life in the Johnson Tutoring Program as a third grader in 2008.

My clearest early memories of Abundant Life was first a tutor that I had, his 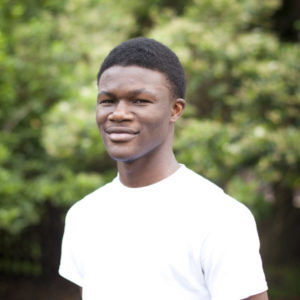 name was David I believe, and from the first time we met he stuck with me for as long as he could through my years of elementary school. Through that time he really helped me with anything I needed from helping me learn my multiplication table to giving me life experiences such as taking me to see my first college soccer game. Not saying that other tutors that I’ve had haven’t done much for me, it’s just that he in particular was able to give me that extra something whether it be motivation or help. I’m not sure where he is or what he’s up to now but I hope he’s doing well.

My second early memory of Abundant Life is the Christmas Banquet that took place every year and I remember the excitement of getting dressed up to be surrounded by friends, family and all those who’ve helped you and everyone just enjoying the moment.

Being a Muslim in Abundant Life isn’t what most would think it to be; it’s neither hard nor complicated at all. It’s actually really great mainly because you’re totally welcome into the group regardless and your views and values are respected as long as respect is shown in return. As a Muslim in the program I’m able to practice one religion while learning about another, and I’m able to share the way my religion works and the staff and friends inform me on values in theirs. To top it off I’m never forced to participate in any religious activities or to learn about the religion; it’s up to me.

I feel like STRIVE was, intentionally or unintentionally, founded upon the ideals of community and togetherness. From my perspective I can only say that STRIVE is a very unique program from any other, even within Abundant Life, because there are two components that come into play. The first is the ability for everyone to really stick together like family through any situation, and when things become difficult, which they do at times, we’re able to take responsibility as young adults and solve it.

The second component is having the ability to be consistent in being a part of and checking in on one another within the group, which demonstrates the strong connections among us. The Spring Break College Trip earlier this month was a success because of these two components. The trip itself was great, starting with a tour of Virginia Tech. From there we moved on to Covenant College, where we got the real experience of being a college student – sleeping in dorms, attending classes, and eating in the dining hall. The trip ended with a tour of Lynchburg College where I was able to personally meet the coaches of the soccer team. In the end it was something you’d have to experience in person; it was very informative and lots of fun.

GOING PUBLIC WITH MY ART

My first art show was pretty successful actually; it’s surprising because I’ve just started being comfortable with showing my work in public. As cliché as it might seem the whole idea to have an art show started with a goal of becoming known in the art world. In the beginning it was pretty difficult because most of what I do takes place in a sketchbook so putting things onto canvas was a hassle and time consuming. With this goal in mind I decided to tell a few friends who were able to support me and help it come to life. In particular, a friend named Kelly Kossi helped me set up a meeting with the owner of a restaurant called Blue Moon Diner. She liked my work and booked me for February and March. After a month and a half of working on my pieces, and with Kelly’s help, I officially had my first art show on the first Friday in February.

The first show quickly led to my second, which is currently going on. On the night of the opening of the first show, [STRIVE Assistant Coordinator] Tyler, a now good friend of mine, came to see my work after he was informed about it by my STRIVE mentor Dylan. Days later I ran into Tyler at a STRIVE event, and he offered me gallery space to do a second show. We briefly discussed plans and later formally met and thoroughly mapped out our vision. I once again informed friends about it and Kelly helped through each step of planning, working and setting up. By mid-April I successfully hosted my second show featuring a great artist friend of mine, fellow junior Deveny Watson.

AN EYE TOWARD THE FUTURE

I have many future goals, which include becoming a well-known artist inside and outside of the community, expanding on my skills in art, and finding myself in a very respectable position in both the near and distant future so that I know that through hard work I’ve benefitted myself and I’ve set a path if not for my children then the goal seekers of the future to walk in. Other goals are classified as of right now but I hope for them to be successful and I look forward to seeing a large community of people who helped me climb my mountain.

Thanks to Abundant Life and the help and support they’ve given me, without their encouragement some things wouldn’t have been possible. They’ve really taught me to express myself and find my position when it comes to letting people know who I am. They’ve taught me that, like in my religion, love overpowers everything, whether it’s love from others, love to others or love from the one who created you. Special thanks to the Abundant life staff from the past, present and future for guiding us young ones, thanks to those who’ve stepped in and out of my life, thanks Mom and Dad and the family, and most importantly thank you God.

Amdane’s artwork is currently on display and for sale, along with former Abundant Life participant Deveny Watson’s, at the Eunoia building (1500 Jefferson Park Avenue) until May 1. You can shop his custom clothing business at Sanda Customs.

Fun in the Community

This week, Advancement and Communications Director, Faith Kelley, spent precious time in the community with the youth in Greenstone Commons while passing out flyers for Registration Night. “For where two or three are gathered together in my name, there am I in the midst of them.” Matthew 18:20, KJV Abundant Life was founded for the […]

This Spring, the Abundant Life STRIVE program celebrated togetherness and brotherhood on their annual Spring Trip. “For ye are all the children of God by faith in Christ Jesus” Galatians 3:26 KJV The Abundant Life STRIVE Program was designed to foster and further leadership skills. This program focuses on preparing young men in our community, […]

An African-American, Black-American, Latino, and White-American walk onto a Marine training base… On September 24th, Chris Nocks, STRIVE Class of 2021, graduated from Marine Corps Boot Camp on Parris Island. The journey just to get to Parris Island required sacrifice, strength, and determination. Throughout high school, Chris had served his community: as a 5/8 Club summer […]