On January 20, first through eighth grade students from the Prospect neighborhood gathered at the Abundant Life house for activities to honor Dr. Martin Luther King, Jr. First, we shared in a pizza lunch together while watching the film Our Friend, Martin. This film explored the issues of segregation and racism during MLK’s time while examining the strides that have been made since then. The movie also brought to light some present day issues and connected them to the teachings of Dr. King. The movie discussed engaging peacefully while being an activist for justice and truth. It was truly incredible how engaged all of the children, not to mention the adult leaders, were while watching. The film presented a lot of difficult topics in a way that allowed children of all ages to receive the information well.

After the movie, we divided the younger kids and the older kids to take part in separate activities. The older kids participated in a conversation about diversity, facilitated by some of the Abundant Life Fellows. For the most part, the students led this conversation about the issues depicted in the movie and their feelings about them. Meanwhile, the younger children discussed their own dreams in light of the movie and what they hope to accomplish or see accomplished in their lifetimes. Here are some of our students’ dreams, and I invite you to pray about them with me:

“My dream is to be a policeman.”

“The joy and pride she took in painting that picture, then being able to show us the completed project is a feeling that I hope all of the kids in our programs are able to actualize one day.”

“I have a dream that everyone will be included and belong.”

“My dream is to respect the universe.”

“I dream rainbows and flowers.”

“My dream is that everyone in Prospect would feel loved.”

“I dream that everyone would get good rest each night.”

“I dream of a world where EVERYONE gets along.”

“My dream is that everyone would have justice and equal rights.”

All of the students then participated in making a “We Have a Dream” poster, where their handprints and initials signified their own individual dreams. The poster celebrates the youth in our neighborhood and the potential that each one of them carries to accomplish their dreams. Overall, this event was a success and a joy to be a part of. This was the first children’s event for Martin Luther King Day that we’ve had in several years and I hope that it will become an annual event. I loved getting to be a part of engaging and empowering some of the kids to articulate the dreams they have. Even in the simplest of ways, we can encourage those younger than us to set and accomplish goals for themselves. 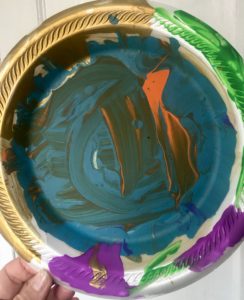 My favorite example from the day involves one of the younger students, Tahari, whose older sister, Sydia, participated in the diversity conversation. I could tell that Tahari was nervous about being separated and that Sydia served as a “comfort blanket” of sorts for her little sister. So we sat her down with a paper plate and some paint to allow her to engage in something that she could actively participate in. When I initially asked if she wanted to paint, she answered, “I don’t know if I can do that.” After some conversation and affirmation that I believed she was capable of painting a beautiful picture, Tahari got to work. And when I say that, I mean I have never seen someone so gladly paint a styrofoam plate before in my life. The joy and pride she took in painting that picture, then being able to show us the completed project is a feeling that I hope all of the kids in our programs are able to actualize one day. I pray that they would all be able to set goals and dreams of their own, and have people who would encourage them to achieve those dreams.

Gear up for Giving Tuesday this year!

It’s October and Giving Tuesday is around the corner!  “ Look not every man on his own things, but every man also on the things of others.” Philippians 2:4, KJV Each day, Abundant Life is blessed to walk alongside the Prospect Community. For the past 27 years, we have been in the community building transformative relationships, […]

At the beginning of this month, Abundant Life was blessed to have met and exceeded its $50K Matching Fund goal. “Therefore, if any man be in Christ, he is a new creature: old things are passed away; behold, all things are become new.” 2 Corinthians 5:17, KJV Back in May, we announced a special summer […]

Fun in the Community

This week, Advancement and Communications Director, Faith Kelley, spent precious time in the community with the youth in Greenstone Commons while passing out flyers for Registration Night. “For where two or three are gathered together in my name, there am I in the midst of them.” Matthew 18:20, KJV Abundant Life was founded for the […]